The Pomfret School, an independent school for grades 9-12 located in Pomfret CT, was in the early stages of architectural design for a new 25,000-square-foot science facility. Promfret engaged Fulcrum to ensure that the proposed primary mechanical support systems for this state-of-the-art facility were both programmatically and operationally sound. The school also wanted to leverage this investment to support selected utility infrastructure needs of other campus facilities, both now and in the future.

Fulcrum’s review of the proposed systems identified a number of issues that required the architectural design team to reassess the proposed HVAC system plan. The proposed design would require the central heating plant to operate continuously. This continuous operation was in conflict with a School strategy that had reduced the Plant’s operating hours by approximately 30% over the past few years through aggressive scheduling and other energy savings measures.

As designed, the new HVAC system would have supported the school’s goal to have a green building, but at the expense of increased utility consumption, costs and carbon footprint. Fulcrum reviewed system options and conducted a cost/benefit analysis to gauge the impact of the proposed design on the campus. This analysis resulted in the development of campus- utility master plan which identified cost-effective, strategies to maximize capital investments and systems technologies to support near and long-term school program requirements.

Upon completion of the utility master plan, the Board of Trustees contracted Fulcrum to undertake an $8.3 million design-and-build comprehensive utility upgrade project. Taking advantage of the School’s proximity to the Algonquin natural gas pipeline and the Yankee Gas wellhead, Fulcrum converted Pomfret School’s heating systems from a fuel oil-based system to natural gas. Not only is natural gas cleaner burning but it is currently priced at less than 1/3rd the cost of the equivalent amount of fuel oil, with a more stable price projection.

As part of the utility upgrade project, the existing fuel oil boilers in the central heating plant were replaced with high efficiency gas-fired boilers, and steam production was converted to hot water, distributed through newly installed underground piping running to the majority of buildings currently served by the central plant. The new system reduced heating energy needs by up to 50 percent coupled with significant improvements in generating efficiency. In addition, the newly installed underground distribution system replaced the existing inefficient and leaky underground steam pipes, resulting in additional efficiency gains by eliminating lost heat. The project also extended the gas lines to the other buildings on campus not served by the central plant, while also replacing various individual building boilers with high efficiency gas units.

An integral component of the master plan project included the installation of cogeneration equipment, allowing the School to convert natural gas to electricity. This resulted in further cost savings given forecasted electricity prices. The final phase of the master plan project extended the gas and electric networks to other areas of our campus further increasing future savings. 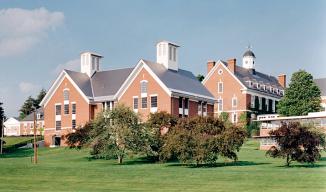 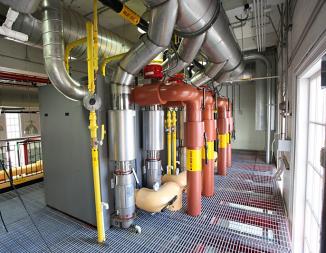 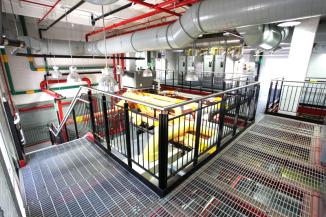